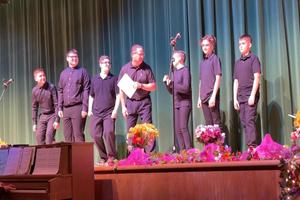 It was a night to remember at Trafford Middle School on Thursday, April 21, 2022, as the TMS Chorus performed its annual spring concert.  This year's theme was Teachers' Favorites.

TMS teachers were invited to review past chorus programs which dated back to 2004 and choose their favorite songs which had been performed over the years.  Chorus Director, Mrs. Rumbaugh, and the chorus members dedicated the show to the school staff as thanks for all the care and hard work they provide on a daily basis.

Many teachers joined the chorus on stage for their selected songs.  Mrs. Rodgers and her daughter, Juna, joined in singing ‘In Summer’. Mrs. Sekera helped to perform ‘My Favorite Things’.  Mr. Bacco performed ‘I Walk the Line’ with the boys ensemble.  Mrs. Lamanna joined the girls ensemble in performing ‘I Wanna Dance With Somebody’.  Even principal Sullivan joined in singing the closing song, ‘Don’t Stop Believin.’ Chloe Stack, Mabel Eguaoje, and Liana Revak served as some of the concert narrators Mr. Bacco and the Boys Ensemble performed ‘I Walk the Line’